Throughout the development of Half-Life 2, there were a large variety of different "Classic" headcrabs present, from the initial removal of them in favor of fast headcrabs that didn't stick, to the reddish headcrabs, to bloody, to, finally, non-bloody headcrabs.

However, this did not last, and even before the first set of zombie models were fully out, the classic headcrab had come back to Half-Life 2.

This model can be found at "/models/Weapons/v_BB_headcrab.mdl". Despite the implied age, it can be opened with the stock HLMV included with the Leak.

This includes the pre-sheet textures in the fast headcrab's texture folder that are not used for the "squashed" models. These same textures are also included in the "v_BB_headcrab" texture folder, albeit at a lower resolution.

These can be found at "/materials/models/Zombie". They appear to be before the separation of the zombie into 3 different classes, since clones of these textures appear in the three other zombie folders. 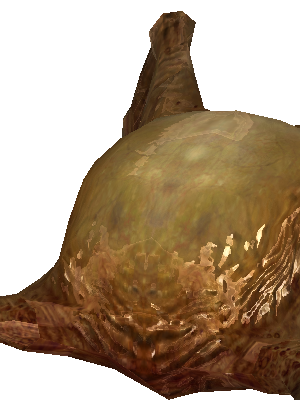 While the classic headcrab had been implemented, it had not yet had its own model created, and evidence remains of an odd period where it existed without an independent model, as both a zombie and individual headcrab.

As a zombie, it reused the "old" zombie model and only retextured the headcrab head's texture. The textures of these relatively simply-differentiated models still remain. Since there is a distinction between the classic/fast headcrab in the textures of the old zombies, the decision to re-include the classic headcrab may have been made during the period where the old zombies were in use, and when adding the new zombie model they just recolored the headcrab used by the pre-classic headcrab zombie as a placeholder.

As a headcrab, it (may have) reused the fast headcrab model, evidenced by a leftover texture sheet still kept in the classic headcrab's folder, which remains in the final version.

The head textures for the "old" zombies. The part used for the side of the headcrab is reused from the pre-sheet fast headcrab.[5]

Eventually, with the transition from the old zombie models to the fat zombie models, the headcrab went from reusing the fast headcrab's model to using its own, which at the time still held plenty of differences compared to its Half-Life counterpart.

The headcrab this version refers to has both screenshots and textures available for it, which provide a decent idea for what it is short of model availability. It has a reddish appearance, with a similar (though bulkier) profile compared to later versions, and is noticeably bloodier even compared to Version 3.

The zombie of this version has a bloated appearance(hence the nickname "fat"), and appears to be based on the blue-shirted citizen model, with a traceably based-on[6] sleeve texture still in use. In the Leak, this zombie's separate torso and legs models are still present, as the zombie that succeeded it has not yet had the models replaced. The torso has a headcrab model attached to it, however it appears to have already adopted Version 3's headcrab and the headcrab used has some rigging issues.

The version shown at E3 2003 and that came along for Half-Life 2's leak. While more similar to the final classic headcrab design, it retains a bloodstained appearance, with nearly its entire front covered in it. While the texturing and animations differ, the UVing is final and the mesh's design will remain the same.

As a zombie, this version's model is a major change from the previous, being more visibly based on the blue-shirted citizen, re-adding the opened chest not present in Version 2, and substituting a head for a stump of one. The textures have also been moved to a singular sheet, and the mesh is noticeably higher quality than previously.

Relatively obscure, it appears in a small set of Ravenholm screenshots released after the Half-Life 2 leak. It appears to reuse the same body as Version 3, and the zombie is identical to Version 3's.

The primary difference between it and Version 3 is that it doesn't have any blood on it (and has a slightly lower contrast), but also doesn't have the more uniform brown color present on Version 5. 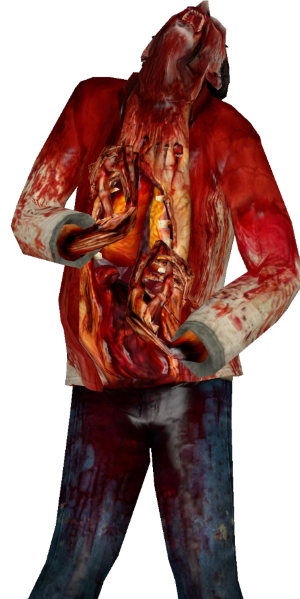 The final version of the headcrab that shipped with Half-Life 2. It appears in a few of the last screenshots, and of course with the game itself. It possesses a uniformly brown look, with comparatively minimal blood stains oriented around the mouth.

An oddball classic-style headcrab model that comes with the Zombie Assassin's model. It appears to be an upscaled version of the Leak headcrab model with a number of modifications, including the welding of the back legs onto the assassin's body, the lengthening of the teeth around the headcrab's "mouth", and the adoption of a completely different texture for just it that manages to be 256x.

Used to prove connections between textures.

Know anything about this I didn't include? Edit it in, and let everyone else know. It's a wiki, after all.