Difference between revisions of "Pre-Pitch Era"

This era started immediately after Half-Life was released, and largely consisted of pre-pitch designs before Half-Life 2 was inaugurated as an "official" Valve project in June 1999[1] (when it was presumably pitched to the rest of Valve). It consisted of mostly exploratory world building through writing and keyart, with very few assets or maps made - the concepts and assets intended for this era were later utilised or retooled for later eras, as by the time they were completed the context of the game had changed.

"It was with those six words that Gabe Newell launched the development of Half-Life 2 in June 1999. Yes, you read that right--1999, only six months after the original Half-Life shipped."

- The Final Hours of Half-Life 2

Once Half-Life hit store shelves on 19/11/1998, there were immediate roundtable-style thoughts about a sequel with a much larger scope, teleporting Gordon across planet to planet around the galaxy and defeating the invading Xenians on each. The early discussions over these ideas served as the starting point to slowly reduce and refine the game's scope, as this concept ultimately presented issues of continuity between game levels.[1]

The game was initially thought of as dark rather than action adventure (the team gradually moved towards the latter by the end of development). The design philosophy did not include a visible end goal (like the Citadel) that you could see from each level,[2] instead it was on a smaller scale where each level or set of levels had an easily identifiable goal.[3]

Much of the plot devised at this point in production is unknown, however it is known that the player was to start the game as gordon freeman who had been forced into working as an agent for some alien body (presumably gmans race) and as such you are wearing an unfamiliar more sinister stealth suit with an unfamiliar voice system rather than the hev suit.[4]

One of the introductions mentioned for this era was where you were waking up in a hospital before being broken out by rebels possibly inspired by jacobs ladder.[3] 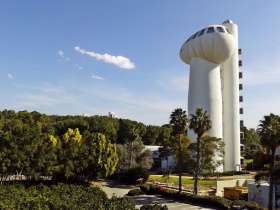 Dark City seems to have played a role in the early visual tone of the game, as well as the design of the stealth suit.[4]

the Hospital from Jacob's Ladder[4] was used as inspiration for a possible introduction for hl2,