Difference between revisions of "Scientist (Evolution)"

Our favorite Black Mesa Science Team had gone through many iterations until the looked like we see them today, going from frightened, nervous wrecks to the somewhat goofy looking they are today. Let's explore how they changed over the years. 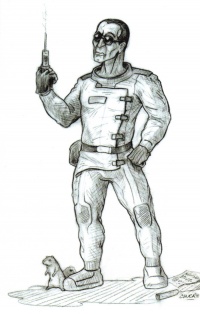 The earliest version of the scientist, made by Chuck Jones. He has clothing different from any of the models, resembling more of a sci-fi suit than a lab coat. This version has round pitch-black glasses, which survived in the next version. 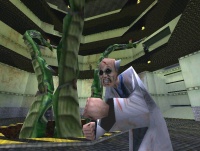 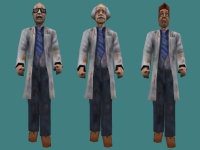 The 3 Scientists present in the 0.52 Alpha

These models are found the files for the release Half-Life 0.52 Alpha and unlike Version 3, are dirtier and have more scarring, mostly on the back of their heads. "Walter's" glasses look similar to the final scientist model, "Einstein" and "Egon's" heads are not the same color as the rest of the body and despite what it may seem, these models have no moving mouth. 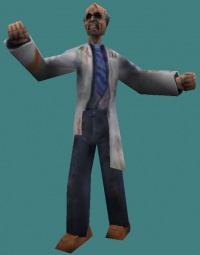 This model is a mashup of Version 2 and Version 3, having the "Mad Scientist" head and the body of the 0.52 models. This model is only used once in the techdemo.bsp map, where it is seen arguing with a Security Guard, only to be eaten by a Panthereye. 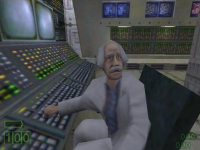 This version of the model looked very similar to the previous version, but with less blood on the textures, but its stance and shape are still close to the 0.52 Version. The scientist's lab coat & slacks are both a clean, uniform white colour with a blue shirt underneath compared to the dirtier white coat & navy blue slacks seen in the previous versions. Something to note is that the Egon head was retextured into an early version of the Luther head. 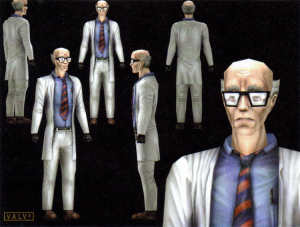 This version of the scientist appeared in the Raising the Bar book. It appears to have been rendered by Chuck Jones. The whole body has been overhauled with the final body model, high-resolution textures, black gloves, a red & black striped tie, and the glasses are "transparent", revealing small eyes. Retail's Deathmatch Highpoly Submodel of the scientist uses a late mesh of this scientist. It appears that this version has less issues with the textures alignment (glasses, for example). Interestingly enough, late version already has retail looking glasses texture for the Walter scientist.

This version of the Scientist is seen in the retail release of Half-Life. He has since lost the black gloves of the previous variant, and is less top-heavy. The Slick head variant has been added, and the eyes visible on the Glasses variant's, well, glasses, are not as prominent as they once were. The Deathmatch Variant of this model uses