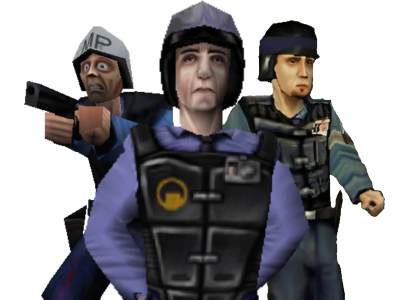 The Black Mesa Security Guard, also known as Barney (not to be confused with Barney Calhoun) are friendly entities found throughout almost the entirety of Half-Life. They are the quintessential partner to the player throughout the game, and are one of the only friendly forces you face. The Security Guard went through several different looks throughout Half-Life's development, changing both posture and faces before ending up with the man we all know and love. 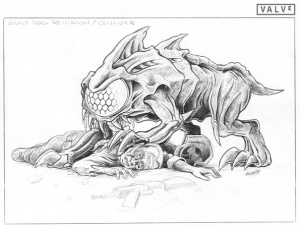 Commonly overlooked by most people, the earliest appearance of the Security Guard is within Chuck Jones's concept art for the Panthereye. His design is quite odd, as he is shown donning a pair of thick lens glasses and a much more elderly appearance, something that no modeled version of the character ever had. This makes it very easy to overlook and assume he is a scientist. however the overturned security guard helmet near the hind legs of the creature is all the proof needed. He also appears to be reaching for an M4, a weapon also wielded by early iterations of the Human Grunt. 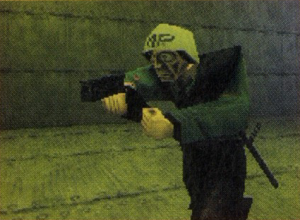 The Earliest in game image of the security guard appeared in a PC Gamer article from July 1997; predating the 0.52 build by two months. This design shares many design traits with the 0.52 version of the model, including a white helmet with the letters "MP" on the front (presumably standing for Military Police), a bug-eyed, frightened expression, and a hunched posture. Many traits consistent with later models, such as a black vest and blue pants and trousers, were established with this version. Judging from the few images available of this model, it had many rigging issues and was clearly unfinished at this point of development. 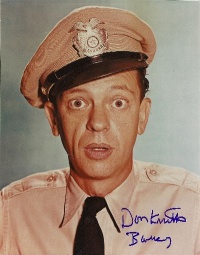 Don Knott's character of Barney Fife has been cited by Marc Laidlaw as the inspiration and namesake for the Security Guard.

The version commonly referred to as The first one, MP, or famously Freeze, is shown in most if not all of early 1997 media of Half-Life, including the 0.52 press build. The model is named barney.mdl, and is the first known time the name Barney is used in relation to the character. The origins of this name can be traced back to the character of Barney Fife (played by Don Knotts) from The Andy Griffith Show, which this model has a similar appearance of. His face texture and animations differ slightly from the previous version - his face is much less sunken in, and while still having a hunched appearance, his animations and rigging appear to be different as well. Interestingly the model was reskinned into the cut Construction Worker entity.

Originally, Half-Life had no companion entities within it - Barney originally was a low tier enemy withing Half-Life. However, this all changed when Valve developer Steve Bond wanted to test out enemy squad behavior. Using Gordon as a leader he linked him to several MPs who were forced to follow the player and not immediately attack. He unexpectedly created the first companion character in Half-Life. This revelation caused a massive shift in thought within Valve leading to the first restart in Half-Life's development, and by the 0.52 alpha, Barney was an ally that could follow the player around and attack when provoked. 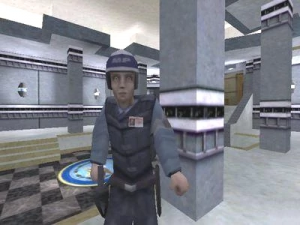 This version arrived in roughly between the 0.52 alpha (september 8, 1997) and the preliminary findings advertisement disk (October 16, 1997). On the preliminary findings disk is an interview with Ken Birdwell which features a video of a group of security guards sporting the same features as this version attacking an alien grunt. His most noticeable feature outside of his face is his helmet which changed from Being white with a blue stripe, to being full blue. 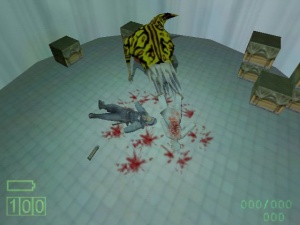 There isn't a lot of info on this version as there is a lack of images featuring him.

His most noticeable feature outside of his body which places him around the time of version 4 is his face and helmet which both bare a strange resemblance to the retail model, the face looking very similar to the second multiplayer sub-model with his eyebrows arched and cut off by his helmet, by extension similar to the preview image. The sides of the helmet are extended down distinctly like retail while keeping the white and blue color theme as version 4 but with a thinner stripe. the texture for the blue sides and back of the retail model indicates the ramp up to the front part of the stripe was erased while the front with the text was cropped from the texture. The lack of information on this version makes him absolutely perplexing; It's assumed that he appeared in between the MP and Ted groups but could well be after the ted variety due to its similarities with retail. 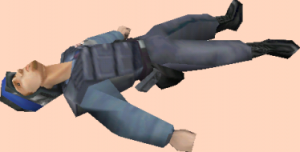 The earliest version of the Ted family of Security Guards, named and modeled after modeler Ted Backman. He made his only appearance in the Half-Life Entity Guide that was released on October 29th 1998, one month before the release of Half-Life. While the "Ted" model had been replaced at the time of the guide's release, the guide uses a variety of early models as example images of the many things you can use in your maps. There are two images seen for the security guard the one highlighted here is the only known image of this version of the Ted model. The only difference being that the eyes on the model are beady and black, no white to be seen. 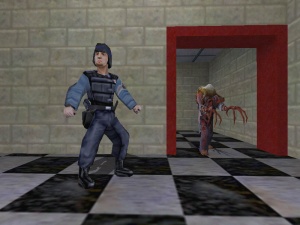 differences from the previous version include, different inner leg texture streaks from texture projection, the eye texture now has a sclera(the white of the eye), the underarm texture now has a dark boarder, the tie is not blurred, the vest is darker, the gun texture is darker and sharper and finally the upper leg geometry may be rougher 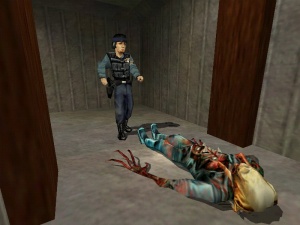 Infamously dubbed "Ted Barney", this version of the security officer model was based off former Valve employee Ted Backman. Not only is this shown by the model sporting Ted's infamous facial hair, a goatee and patch, but also some versions have textures named TED_FACE.

This one still has many features from the wide-eyed ted, including the same body textures and general model shape, except for the head. It still seems to be unfinished and merely in a transitionary state.

A later, more polished version, still modeled after Ted Backman exists, but was fully dubbed BARN_ internally, perhaps solidifying it was to be an actual design.

Many theories exist however, suggesting this security office model was a inside joke for Valve employees, but this is contradicted by how much Ted would continue to appear as a character model in Valve games.

differences from the previous version include, more details in the vest, darker jean pockets, taller shoes. Strangely the eyes appear triangular as if the triangle that was supposed to show the texture accidentally had its facing direction inverted, leading to the face not being drawn. 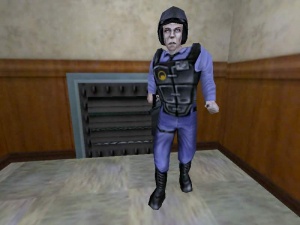 Another overlooked version of the security guard. This guard only appears in a single screenshot from (insert here). This is the first appearance of the final body and helmet of the guard. The most noticeable difference being the face texture, the shoe uv is also different while the pants appear to be closer to the geometry of the first multiplayer sub-model but with the second/retail uv as the sharp corner on the leg strap is not only smoother but the lower part of the bullet vest is not skewed as sub model 1 is. The face texture is completely new and appears nowhere in the game. Contrary to popular belief it is not the Slick or G-man face texture.

And now we reach the guard featured in the retail release of Half-Life.

This guard’s animations appear to be redone, displaying a more confident and realistic posture compared to the hunch that all previous versions had. Additionally, the face texture would reach its final form as an older, placid looking man with no facial hair. The rest of the textures have changed greatly, as well- the top of the vest was moved down to display the tie (now black instead of red), the card was updated for the new head, a Black Mesa logo was added on the front of the vest (with the lambda on the back removed) and the overall palette of the character had been dulled compared to previous models. The “MP” band on the left arm and the purple band on the helmet had been removed entirely. 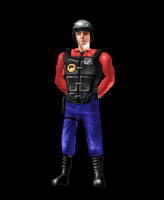 The black mesa logo on all the textures are octagonal rather than circular.

Unlike the actual model, the preview shows a model with no shirt colored patch on the torso where the arm connects to the body, the arms also have a smooth texture rather than wrinkles, the face is different from retail also showing an asymmetric brightness with thinner lips.

The head of sub model 1 is exactly like the retail singleplayer model, with one difference being streaks on the neck texture. The top strap of the bullet vest is flat much like the ted and below body versions rather than protruding with geometry with the lower part on the legs skewed by the uv map, the strap on the right leg is shown to be straighter than retail. this models shoes have a different uv map to single player and sub-model 2.

The head of sub model 2 has a uv map that skews his eyebrows into an arch, much like the model preview, but unlike singleplayer, the vest has it's shoulder strap geometry like single player and a similar boot uv map. 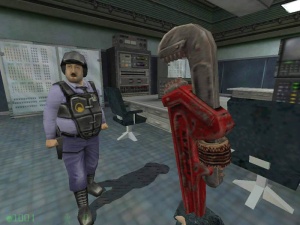 The early version of Otis is featured in several pre-release screenshots. The two most prominent differences are the slightly more rotund head shape, and his donning of a security guard helmet; which is something he never wears in game. 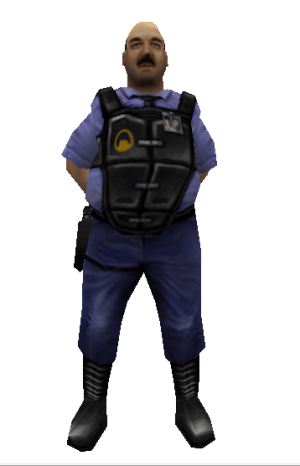 The final Otis featured in Opposing Force. The lower jaw has been trimmed down, and he has been given two head submodels. In Half-Life: Blue Shift an unsused black variant is in the second head submodel replacing the alternate from op4. 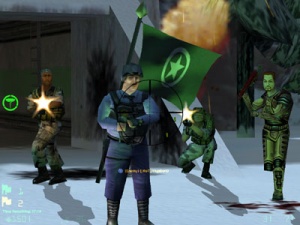