The visual gem of Team Fortress 2, ctf_2fort has easily had the most released of it, beta-wise, compared to any other map present. 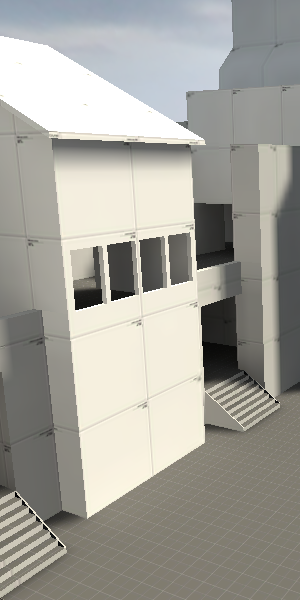 An extremely early version of 2fort that was present in SFM's files. Most of the map is dev-textured, with evidence of the two sides being mirrored. Half-Life 2 fences (and, on occasion, textures) are frequently present for what seems to be placeholder purposes. The map has many similarities to its TFC counterpart not shared in the final version, such as hyperloop-style exit/entrance spawn doors, and the platform going above the pit, rather than around. There are multiple references to some early TF2 entities:

At his 2012 presentation, Moby Francke showed off in his slideshow an early version of 2fort before a majority of the textures were added, with a few untextured player models alongside. Curiously, there seem to be signs placed in front of each of the two buildings saying what side they are. Since there is some texturing, it is clearly after version 1, but it lacks the semi-complete texturing of version 3. With some more recent filmed presentations, more shots of the fort have become available. 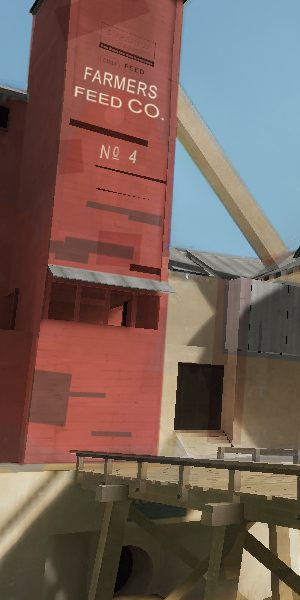 Within the files released by Valve to the press, there were two pieces of concept art for 2fort. They are very lightly painted-over screenshots of it, with some vague shapes added and the overall color balance tweaked[1]. However, the near-omnipresent aliasing on a majority of the shapes gives away that this is practically what the map looked like by the time this art was made.

In comparison to version 2, there is much more texturing, with the forts having their respective color. The sewers area has yet to get any water within it, but is more detailed than before. Since there is a large opaque area painted over on the front of the blue fort, it appears that the "side indicator" sign had not been removed from it during this period. Overall, the map maintains a fairly simplistic style, with lush colors and fairly little detail.

This is where things began to take shape into the version of the map that shipped with the game. That being said, much of the level is still incomplete and far out from its final rendition. Both intel rooms have been given their Spytech design, albeit with some difference from the final game. The BLU side has a yellow tiled floor as opposed to its later dark blue version. The basement resupply room on RED side appears to use a spytech design as opposed to a locker room design, similarly to the cp_well spawn rooms. BLU's battlements are unfinished, and have been mostly omitted from the trailer, save for some small scenes where it can be seen that they are using temporary blue concrete textures. The intelligence room uses a different railing model overlooking the computer room. Finally, the wall at the bottom of RED's barn staircase has the old TFC RED logo on it. 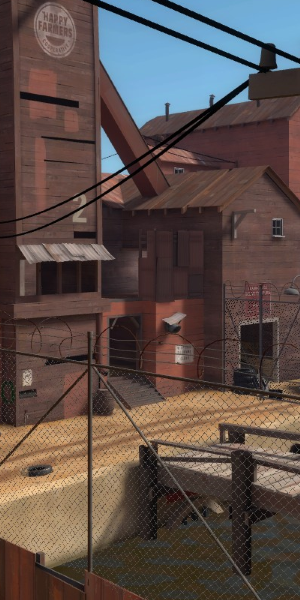 This is how 2fort appeared in the second trailer for the game, as well as surrounding media. Nearly final, this version has a largely identical appearance to the final aside from a few noticeable differences: The bridge has yet to have a roof added, there are still signs stating the team name above the sewers, and signs next to the intel room respawn rooms. Some logos and textures also still differ, such as the one above the blue building, or the logo on the "spytech" floor of the red fort. Most notably, the majority of Blu team's fort has been finalized from it's trailer 1 predecessor.