The Citizens of City 17 have gone through many design revisions throughout the game's development. Most of these citizen have, in one way or another, had media released for them, ranging from footage to screenshots. Citizen.mdl. It's defining features are the gasmask and hazard suit it wears along with a red armband, black leather gloves and a desaturated brown apron. We can see this Citizen as late as early/mid 2002, being attacked by a Strider. The wasteland citizen is the second earliest rendition of the citizen model. A multitude of citizen models are referenced and missing throughout the WC mappack, so it is difficult to discern which models in particular had used this form of citizen, although it is known in the very least that

wastelandcitizen1.mdl was used in some places. This model's appearance is unknown as no screenshots of it exist, nor are there any leftover textures of note in it's materials folder. Samuel in the leak is presumed to use the same uniform as this model. It is assumed that the Wasteland Citizen was to be seen with a brown shirt, grey pants, brown shoes, and a darker brown armband similar to that of the Gasmask Citizen. By the time of the leak, all original "wasteland citizen" models are removed fromt the game. The model "Samuel.mdl" still exists within the files, using a different version of Art's head mesh and facemap than the final, and allows for users to take a look into how the Wasteland Citizen may have looked in game. Samuel's model, in turn, is connected to the Gasmask Citizen, with a similar mesh and textures to the Gasmask Citizen, as well as a different facemap by the same name in the Gasmask Citizen's texture folder.

The "orange collar" or "city" citizen only exists as a set of textures found in the "citizen/city" folder. This model appears to reuse portions of other models, including Samuel's hands, as well as reusing some textures but baked onto different UVs, notably the shoe texture being the same shoe as the Gasmask Citizen. Due to its texture styles coinciding with that of the stenographer chasm worker, and the unique model nomenclature of the citizens that coincided with

c17_citizen_minimal.mdl (that nomenclature being male#.mdl), it can be deduced that the model had most likely been used around the early half of 2002. None of the textures have any normal maps or alpha channels.

The e3 2002 "blue" citizen marks the first of a long list of various citizen textures reusing the same mesh with few differences, which had continued up into the leak, and can even be seen in the final game, with cheaple.mdl using a low LOD of this model. The main shirt portion of the texture can be found in Dr Kleiner's texture folder and, although the arms no longer exist, a later version can be found in the "citizen/city" folder using a different color. Other textures descended from it can be found in the classic zombie's folder, used for the 2002 zombie and later the Leak's current zombie further modified. As a result, a near perfect recreation can be made. Its main points of interest include the unknown emblem on the citizen's back, the blue shirt, the brown pants, and the black gloves. Although the meshes appear to remain mostly the same, the model seen in screenshots appears to have a slightly different collar than the citizens found in the leak.

The early 2003 citizen, also called the "city" citizen due to the texture location, or "green" citizen, shares many of the same features as the e3 2002 citizen, including an identical model. Most textures are modified version of the 2002 citizen. The arms and torso textures are a deep, muddy green instead of blue, and the back texture now uses a Combine emblem instead of the emblem of unknown origin seen on the blue version. The pants appear to be a darker brown than that of the previous rendition. Other than these texture changes, the models appear to be identical to each other. The leak citizen is the citizen type that appears in the Half-Life 2 leak. It sports a beige long-sleeve shirt, green pants, and black shoes. Notably, this citizen is the first since the wasteland citizen to include an "identiband" armband on the left arm. It also appears to be nearly identical to the e3 2002 and early 2003 citizens, albeit with a different, shorter collar. This citizen was seen during the e3 2003 conference for Half-Life 2, and appears in many different promotional screenshots of the game. It is also the first version of the citizen to include a medic version, as well as an unused "ammo" version, implying that only specific rebels could supply Gordon with ammunition at one point, as opposed to the final, where any non-medic citizen can give Gordon ammo. It is also possible that this ammo version may have evolved into the rebel type seen in the final game, but this cannot be confirmed with any amount of certainty. It is also unknown if there were female citizens that existed with this version.

Although previously relatively unknown due to the lack of good, solid information about it aside from some low quality footage from e3 2004 and the corpse.mdl model, this version of the citizen recently had a version of its texture released during the Facepunch Leaks. This citizen sports a particularly strange shirt, complete with a corset on the back, green shoes, and black pants. Interestingly, the texture used for the corpse model appears to use an altered texture as its base, as the pants on the corpse are grey, the shoes are black, and the shirt is slightly more saturated. 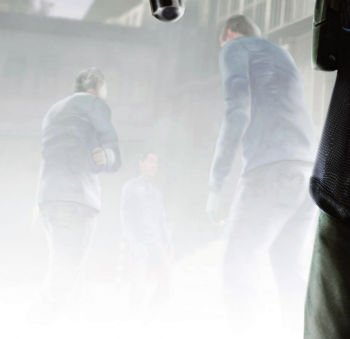 Although going mostly unnoticed by the community, the blue eyed Metrocop concept art, which is painted over an ingame screenshot, includes five separate citizens in the background using a slightly different model than that of the final version. Although the shirt appears to have been finalized at this point in time, the pants appear to be the grey version of the pants found on the e3 2004 citizen, as they contain large back pockets that are not found on the final citizen, but are found on the e3 2004 citizen's textures. In addition to this, the pants appear to be a distinctively different, more monochromatic color to the pants, whereas the final citizens wear pants with a near identical color to their shirts. Unfortunately, although this hybridization clearly uses the corpse/e3 2004 citizen pants, it is unknown what shoes these citizens may have been wearing due to the concept art whiting out any areas where these would be visible. This is the final version of the citizen, and the type that is used in the final release of the game. They wear matching blue jackets and pants, along with brown shoes. Some refugees substitute the blue jacket with a tan one. They also come in rebel and medic variants. Rebels wear either dark green or lighter blue jackets, and all of them wear various pieces of Metropolice outfits, including armor, and boots, as well as beanies. Medics forego much of the armor, save for one belt and the main chestplate, and wear dark, tan pants and either grey or light blue jackets with red cross armbands on each arm. Some also elect to wear gloves. This version's main outfit was conceptualized by Moby Francke.

Found on a few versions of c17_01 and d1_garage_01, the stenographer chasm worker would have, well, worked as a stenographer in a chasm. It shares the head texture found in the citizen "city" folder and has an identically shaped collar as the orange collar citizen. Referred to as "worker.mdl" and "borealis_worker.mdl," these two models are nearly identical except for their colors. a "dead" version exists for the borealis worker. The only existing version in the leak uses male_07 "Mike's" head mesh and textures. Although the Borealis Worker is obvious, it is unknown with any amount of certainty what the worker would have been used for. 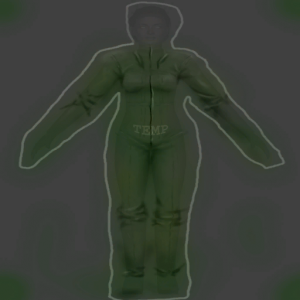 Textures for an unknown temp female model can be found in the "extras" folder. It is speculated they may have been used for the model

c17_female1.mdl, but this is unknown. 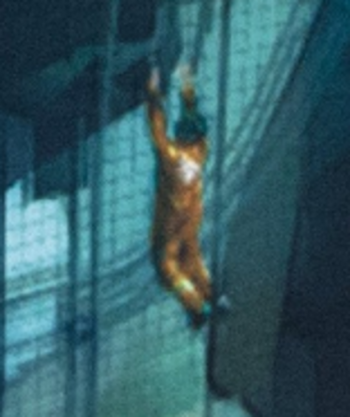 Appearing only in concept art, this citizen is seen wearing an orange jumpsuit. In one piece of art, said citizen is also seen with an unknown emblem on his back.