Crap is a simplistic testmap. It may have been used to test water shaders.

Crap is an oddly-named testmap that was most likely intended to test the behavior of textures underneath a water brush. The wall bordering the water and floor are textured with brick/brickfloor001a, but the (26) cubes within the water vary more greatly between 4 different textures. A, of course, brickfloor001a-textured staircase is also included, which goes up to the skybox and down to the bottom of the watered area.

(All available in the Leak) 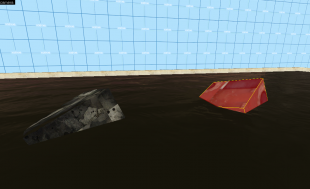 Another rotated brush placed close to the first. It uses BRICK/BRICKWALL032C, instead of concrete/concretefloor022a.