The Soldier, one of the Team Fortress' series most popular classes, has gone through some drastic design changes throughout his appearances in the series, making him more and more resemble a modern American Soldier as time goes on. 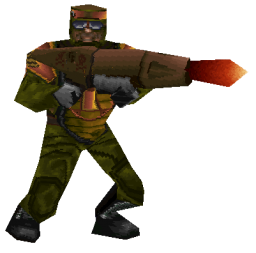 In QuakeWorld Team Fortress, the Soldier appears to wear a chestplate over a camoflagued jumpsuit. He wears a helmet with glasses and carries the Rocket Launcher in thirdperson.

This variant of the TFC Soldier was only seen in a few screenshots before release, however, it more resembled the QWTF Soldier than release TFC Soldier, with the notable presence of a helmet, goggles, and a team coloured jumpsuit.

The version of TFC Soldier seen in the release build up until 2001 is much different from the previous two versions. The design scraps the original goggles and a helmet for some camouflage facepaint and a team coloured beret. His jumpsuit was made into an urban camouflage with the colours black, white and grey, rather than being team coloured.

The TFC playermodels were remade in 2001, to coincide with Gearbox's HD model pack released alongside Half-Life: Blue Shift. The Soldier now wears a vest with ammunition pouches. The QWTF model's team-coloured jumpsuit also returned, and he now resembles an American soldier much more. In addition, his animations were also taken from the sequel, then titled Team Fortress 2: Brotherhood of Arms, before it was scrapped and turned into the retail TF2. In the TF2 lore, this design is considered the canon design for the Soldier.

Now renamed to the Rocket Infantry, the Soldier is now sporting a more tan coloured uniform, with goggles and a jetpack. He also has yellow armbands and has changed to an African-American man.

The Rocket Infantry or the Soldier didn't make it into Brotherhood of Arms as we know them, but they were succeded by the Marine, who wears a green camouflagued uniform, and is now tanned.

THe Marine was succeded in spirit by the Commando, who wears darkly tanned and red leather clothing, with drab metal armour, a grenade sling, and a helmet. This model has an underbite, which would remain for all the following designs.

This article about evolution of a subject could be expanded.