Shortly after the release of the Orange Box, Gabe Newell was concerned that Valve was focusing too much time on releasing games, and not on experimenting/innovation. To combat this, he thought up the 'Directed Design Experiments'. In essence, Valve would shut down development on games and let the employees do whatever they want. Valve would turn into a creative playground for four months, with no stress or pressure from developing full games.

One of these experiments was titled F-STOP; A project that made Gabe Newell think "Fuck yeah!" after seeing it. Valve were sure that this could be the mechanic for the next Portal game, thinking that Portal as a franchise would have a new mechanic each game, with a common link of Aperture Science experimentation.

This, of course, didn't pan out.

After nearing a year of active development, Valve began to question everything. Playtesters thought the overall mechanic of the game was fun, but were confused at the fact they didn't have a Portal gun... in the sequel to Portal. In October to December of 2008, development of the game was completely rebooted, leading to the Portal 2 that released.[1]

The project was headed by Joshua Weier[1], the lead behind the initial experiment, accompanied by Jeremy Bennett and Eric S. Kirchmer, two artists that went on to illustrate concepts for the project.

Post-Directed Design Experiment, F-Stop was decided to be a prequel to Portal with no GlaDOS (but a cameo as Betty), no portals (only for gameplay, possibly seen in a test for a prototype Portal gun behind glass), a new mechanic, and presented in Team Fortress 2's art style. The mechanic itself was stated to be non-violent, much like the first Portal, involving a camera and taking photos of objects. The story of the game was to feature Cave Johnson, a dead southern billionaire with his intelligence put into a computer, much like GLaDOS.[2] He was imagined with a voice similar to that of George W. Bush, beginning as a partial side kick before turning on the player due to their inevitable crimes against robots throughout the game.[3] A character named Greg was performing as Cave Johnson's assistant. As evidenced during the Portal 2 ARG, Aperture Science at this stage were using “tramps, lunatics and foundlings” as test subjects. 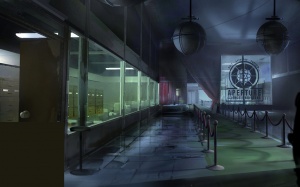 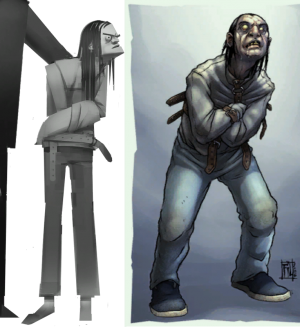 Reslists contain a list of content needed for a map, including default content. Alongside these are Snd files that contain a list of sound events occurring in the map, including default sounds. By looking at the content loaded in some of these files, it can be concluded that several are for F-Stop maps, allowing not only the name of the map to be discovered but also approximations of what they entailed based on the content loaded. These files indicate that not only was Portal content used, but also content from Team Fortress 2, Half-Life 2, and its episodes.
The camera had two sound events, called “capture” and “release”, along with associated sounds called “snapshot” and “release”.

There are at least 7 maps, with 2 or more unknown maps that are missing from map reslists, judging by the amount of F-Stop content that has no associated map reslist, including F-Stop VCDs that have no reslist, the lack of reslists that contain diorama content, and further content from F-Stop that is not used in the available reslists.

Within the scripts folder for Portal 2 is a fair amount of F-Stop related files. One of these related folders is called button_door that contains scripts used to spawn and setup all the buttons, signs and doors in a F-Stop map when it is loaded. This reveals how the buttons, doors and signs were formulated and what entities they used. Specifically, func_doors were still in use for the test chamber doors and func_brushes were used for the signs.

Weapon_manifest.txt, References the removed weapon scripts for the camera and placement(photos) weapons Particles/particles_manifest.txt, Has several unused particles referenced, some of which were used for F-Stop, all of which are still in Portal 2 Game_sounds_props_Aperture.txt, Sounds used by a number of puzzle elements both F-Stop era and retail thanks to being updated throughout development Game_sounds_animation.txt, The sounds used by the mannequin performing the Portal gun experiment scene Game_sounds_vo.txt


Being auto generated this could be the order they are first used in, excluding possible repetitions. Some but not all of these are featured in the reslists for the F-Stop maps along with accompanying VCDs, implying that there are more maps that do not have accompanying reslists, atleast 2 at that. Some of the file names match lines that are said in both Portal 2 singleplayer and PeTI. Strangely some of the sound files are referenced out of order in the map reslists. Each of these sound events have an associated vcd that are still present in Portal 2, there is also a vcd for a 90 decibel version of the introduction to betty by Cave Johnson.

During the Portal 2 ARG, it was possible to access BBS messages on the ARG website, including corrupted transcripts of Cave Johnson voice lines from F-Stop (including the casting call), and a memo on low risk test subjects (orphans, vagrants and psychiatric patients), some of which are featured in F-Stop screenshots in a diorama.
A number of voice lines seem to have made it all the way from F-Stop development into Portal 2 (although voiced by J.K. Simmons), as evidenced by the original casting call (which was pictured to have had a voice similar to that of George W. Bush) compared to some of the retail lines.[2] While the Portal 2 Perpetual Testing Initiative sound files for the uploaded Cave Johnson are not named similarly to those of their F-Stop conventions, the subtitles call him "Pure Intellect Cave", the same as in F-Stop.

Some F-Stop line names appear to have represented what was being said, as a few have content matches to both single player lines and Perpetual Testing Initiative lines (such as the uploaded Cave Johnson). Some of these are "altcave_dead_cave" lines from the Perpetual Testing Initiative, and match up with the lines from the casting call; these are still called “Pure Intellect Cave” in the closed captions.

There are several commands still present in Portal 2 that relate to F-Stop in some way. Most of these relate to the blur that can be applied to entities. Another leftover from F-Stop is the presence of TF2 commands related to the hud in certain game modes, of which the TF2 hud textures are referenced in F-Stop.[11]

The code for this entity blurring effect is present in Alien Swarms SDK[9], it also has some updated code from the directed design experiments such as the npc addon system and some entities from the 2bots1wrench experiment. The entity blur effect requires several unique materials that are not present in Portal 2 but are present in CS:GO[10].
Portal 2 still has vmt proxies for some F-Stop specific materials, but the render targets for each of the 3 photos have been removed:

There are several entities still in Portal 2 that are very likely to have been in use around the time F-Stop was in development. Two of these entities have similar names and no references to portals in their descriptions; with one of which being directly used for portals, it would be assumed that its description would make that known as with other Portal related entities.
Firstly, info_placement_helper[11], an entity used to help move portals to a specific position if the player attempts to place one near it, has no references to portals specifically. It is stated to be used to move objects around instead; its keyvalues imply that when it was just for objects, it could attach the object that is being placed to another by the use of attachment points, similar to the TFObject code present in the Source 2007 leak that allowed for buildings to be built on top of each other.[12]
Next is func_placement_clip[11], stated to be similar to func_noportal_volume at some point. Despite this, it does not provide any apparent functionality relating to portals and has no description relating to portals, as with info_placement_helper. Going by the name and its relation to the placement part of the F-Stop mechanic, it would have prevented objects from being placed within its area.
Much of the available information about F-Stop uses the word “placement” for functions relating to moving an object from its original position to a new one through the use of the camera and photograph. Its description is very similar to that of the Team Fortress 2 entity func_nobuild.[12]
Seemingly due to its simplicity in being something like a trigger brush but by radius around a point, it was re-used for Portals due to its higher versatility.

Within Portal 2 is a fair amount of F-Stop textures. Most F-Stop world textures have the key word ‘Aperture’ defined in their VMT; one such remaining texture is wallpaper001a, which is seen in concept art.
[[File:Wallpaper001a.png|thumb] Within the weapons texture directory used for the Portal Gun is "camera", the texture of F-Stop's weapon_camera which shares similarity with cameras derived from the Leica 2 and 3 models, and v_hands, the texture of the viewmodel hands that hold the camera and photo. Within the models texture directory is: "bot_male", a mannequin texture which has a wireframe of an earlier model's UV in its alpha channel; "button", an F-Stop re-colour of the Portal floor button; and "door_01", a F-Stop re-colour of the Portal door.

For the HUD, some of the viewfinder textures were re-purposed for Portal 2's Co-op Mode when the players view is swapped to one of GlaDOS’ cameras. Oddly, one of the textures appears to be in an entirely separate folder (crop_mark001). There are also HUD icons for when you have either the photo or the camera active, but are unlike normal weapon icons in that there is a neutral version of the icons. There is also a locator that can point out which direction the chicken is currently.

Within the old SteamVR performance test depot files is a variety of Portal 2 beta content, including a large amount of earlier versions of sign textures. Among these files is a texture for Portal’s Portal gun pedestal, using F-Stop’s color scheme, as indicated by the altered versions of the floor button and door. This would likely have been used for the prototype Portal Gun scene.


Within the Source Filmmaker beta files is an edited version of the colored variant of the female mannequin (with additional googly eyes, lipstick and blush), apparently used as a placeholder for the mannequin in Expiration Date. It contains a separate set of UVs from the other mannequin model.

There are also a few particle effects left over from F-Stop including Chicken.pcf and Zombie.pcf, the former of which is missing a texture called feather01.