- This is the successor to the 'Dhabih Eng' era, the Cameo Era hub page, with brief blurbs and links for each of its two development stages. 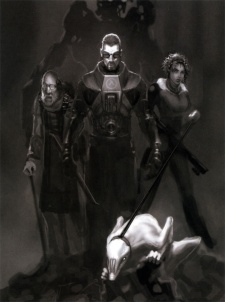 This era began sometime in 2000 (June at the latest; the "proposal date" of the 'Timelapse Opening' script[1]) with the adoption of a circular story design philosophy, centering around a single area/region which the player exits then returns to over the course of the game — City 17. Many new concepts and areas were solidified during this era, including the Air Exchange, an opening Wasteland train ride, gasmasked citizens and the return of the Black Mesa Science Team. Prompted by Laidlaw's grim story vignettes, the team's concept artists — Dhabih Eng and Viktor Antonov — created numerous pieces of concept art for the era, featuring an overall darker tone, more stylistic color choices, and somewhat exaggerated character designs. Gordon's journey was marked by cameo-type segments with ally characters for each major section (akin to retail's Colonel Cubbage and Father Grigori), with a select few like Alyx and Captain Vance defining much of the plot.

This era heralded in the foundations of the HL2 we recognize today, albeit with a much larger scope.

"There was you and a bunch of other agents were like you. Your HEV suit would have become this weird, black leather stealth suit with all these devices latched on it. There was some kind of parasitic implant thing in his brain that would kill him if he went against orders." Gabe Newell took one look at it [and said]: "It's not Half-Lfe." "He was right." Marc agrees. "We had some really elaborate stuff going on with agents and counteragents. That was really convoluted. Gradually the process was to simplify things to make them directly related. So it gradually changed from this globe-spanning thing to, 'Let's do a city, or a region, an area where you go out and come back in,' you end up kind of where you began. It was our little local level design philosophy on a larger scale. You can see your goal, and you had to thwart a bunch of obstacles that get in your way, and at the end of the level when you get there."

Changes from the Hyper Era

New Tripod hopper? (this art is really out of place of hl2, its in the same style as hl1 art, I've put it here due to the concepts towards the end experimenting with wildlife) Vertigo art deco museum then palace (figure out this) Player drivable Vehicle added to Wasteland traversal (at some point vehicles were properly added physically)

C-130 changed to Osprey helicopter? (voice files and outline in rtb: uncorrected proof) C-130/Osprey crashes into Vertigo skyscraper, alyx captured, escape to other roof tops that have stalkers on them

air exchange was thought of as a few different possible concepts or all at once (i.e. polluter and atmosphere portal dam)

Skitch, Tbot and d0g development (also vignette) Concept art for tbot has the right proportions and features but different details to the textures and known model components Era started with tbot design Scrapland vignette seems related to some inspiration from forbidden planet

Slow drift from cartoon esque to realistic with same maps/plot